Majority of Terrorists Who Have Attacked America Are Not Muslim, New Study Finds
Mythili Sampathkumar, New York, 23 June 2017 - The Independent

Most of the designated terrorist groups in the US are right-wing extremists, not Muslim, according to a new report.

A joint project by the Investigative Fund at the Nation Institute, a nonprofit media centre, and news outlet Reveal from the Center for Investigative Reporting took a look at the 201 designated terrorism incidents within the US from 2008 to 2016.

The results: "right-wing extremists were behind nearly twice as many incidents" as terror acts associated with those identified as "Islamist domestic terrorism". 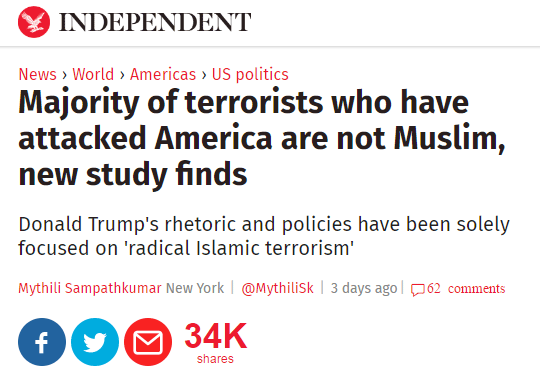