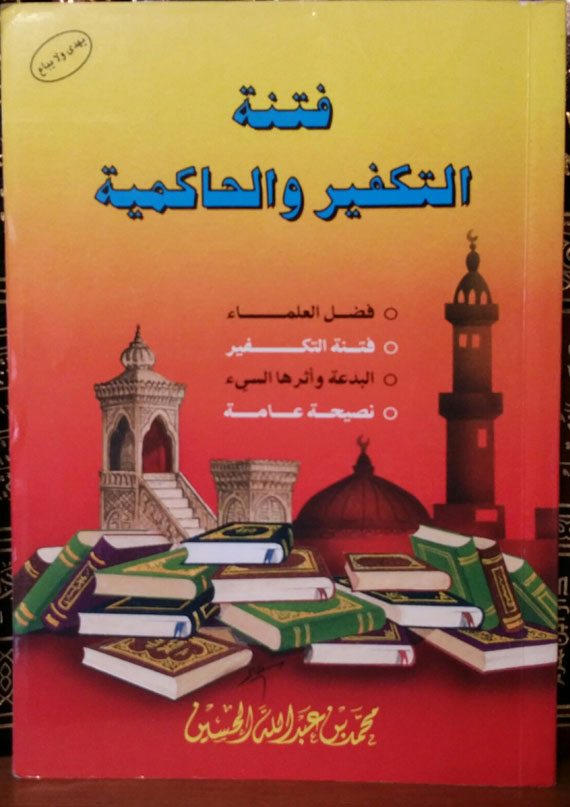 During the early 1990s a series of dubious individuals, ignorant pseudo-scholars appeared in Britain. With a command of the Arabic language and able to deceive people into thinking they were scholars, they acquired followings. They include Abū Ḥamzah al-Miṣrī, Abū Qatādah, Omar Bakrī and others. They were promoting the doctrines of misguided thinkers such as Sayyid Quṭb, Abū Aʿlā al-Mawdūdī and Taqī al-Dīn al-Nabahānī who were responsible for creating political movements based upon distorted understandings of basic Islāmic tenets. They presented the idea that all contemporary Muslim societies are non-Islāmic and illegitimate, that these societies are led by rulers, (or classes, families or political parties) that have usurped divine authority. They gave the Muslim declaration of faith ("None has the right to be worshipped but God alone") a purely political explanation. On the basis of this political explanation, they excommunicated whole societies, governments and their institutions and then reframed lofty institutions such as jihād (just war to remove violent aggression from peaceful preaching), enjoining good and prohibiting evil as a constant struggle against governments, regimes, their institutions (army, police) and whoever allies and supports them. They actually revived the doctrine and methodology of the very first sect to break off from Islām, the Khārijites (extremist renegades) and their methodology centres around exaggeration in two basic concepts. Ḥākimiyyah (lawgiving) and takfīr (expelling a Muslim from Islām). This innovated, heretical doctrine does not actually originate with so-called "Wahhābī" Muslims or "Salafists". These individuals, Quṭb, al-Mawdūdī, al-Nabahānī, were from Ṣūfī, Ashʿarī, Māturīdī backgrounds and they are the pioneers of this distorted idea (see here).

Perceiving this misguidance Salafī Muslims within UK and beyond played an instrumental role in countering this extremism and distortion of Islām. From those efforts was the mass distribution and translation of books such as the one pictured around 1995. It is titled, "The Tribulation of Takfīr and Ḥākimiyyah" and discusses the extremism and exaggeration in these fields by the neo-Khārijites. The book covers

On the back cover of the book is a quote from a prominent Muslim scholar which states purifying Islām from the views and doctrines of the heretics and deviants, (such as the extremists and terrorists) "is a form of jihād" which is "a collective obligation" upon Muslims by agreement.