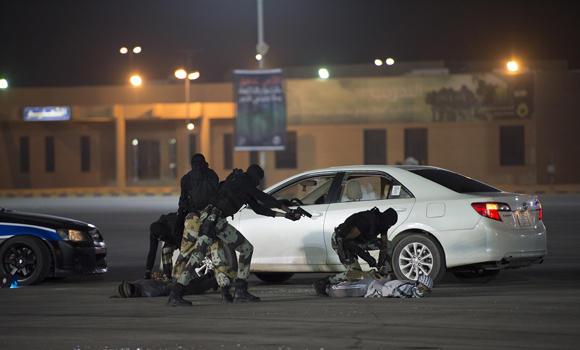 Special security forces subdue a "terrorist" during a demo that was held during a graduation ceremony in Riyadh in this May 2014 file photo. Security forces on Tuesday announced the arrest of several people trying to recruit Saudis to join the terrorist Islamic State group. (SPA)

Security forces in the town of Tamir in northern Riyadh arrested eight extremists who tried to lure youth into joining the Islamic State (IS) and the Al-Nusra Front, according to the Interior Ministry.

Ministry spokesman Maj. Gen. Mansour Al-Turki said the arrests were made on Monday in accordance with a royal decree issued in March ordering punishment for anyone joining or aiding terrorist or extremist organizations on the government?s blacklist.

Showing sympathy or providing moral or financial support to such organizations is also considered a crime, according to the decree. The arrests followed complaints from several parents that their children were being influenced to join or support such groups, he said.

"These men used to meet at rest houses and farms close to the town and were frequently visited by youth during their meetings, arousing suspicion among residents, who reported the matter to the Interior Ministry," he said.

"The men had convinced several young people to travel to conflict zones where terrorists were on the loose," he said.